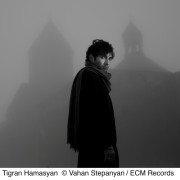 Luys i Luso – “Light from Light” – is Tigran Hamasyan’s first ECM album, a spellbinding exploration of Armenian sacred music, featuring the prodigiously gifted pianist with the Yerevan State Chamber Choir. Repertoire includes Armenian hymns, sharakans and cantos from the 5th to the 20th century, all newly arranged for voices and improvising pianist by Hamasyan himself. The album was recorded in Yerevan last October, and produced by Manfred Eicher.

Tigran Hamasayan has long been deeply interested in Armenian sacred music, increasingly drawn to its “incredibly beautiful melodies… Over the years the idea to do an entire album with Armenian sacred music had been building and growing in my mind. About two and a half years ago I began to work on the first arrangements.” Ideas about repertoire have evolved along the way. “At one point I thought about doing an album devoted to Mesrop Mashtots, the 5th century saint, composer and linguist. But the working process led me to think more broadly about it, and I decided that the album should be of mixed repertoire. So Mashtots is in there, along with Nerses Shnorhali, Grigor Narekatsi, Grigor Pahlavuni, Mkhitar Ayrivanetsi and Komitas.” These are some of the outstanding figures of Armenian music history.

Hamasyan is fascinated by the idea of Armenian sacred music as living tradition: “At its high point, everybody was singing it differently. There are a lot of places in the music open for interpretation. Nerses Shnorhali actually wrote about this in the 12th century. Letters were being exchanged between the Byzantine government and religious patriarchs, talking about the high level of Byzantine and Armenian sacred music, and comparing the different schools. And Shnorhali wrote that singers could sometimes improvise, based on the mode and where they were reaching in the melody. This is phenomenal – it’s evidence that this music had improvisation in it. And for me it’s a direct encouragement for improvisational interpretation.”

The fresh and invigorating arrangements permit a maximum of improvisational freedom for Hamasyan as soloist (“I’m playing completely different things every time we perform this music”), but to be “free” inside the material, he notes, one has to understand its special demands and idiosyncrasies.

“When I thought of the collaboration with choir I was originally looking for singers who didn’t have trained classical voices, and I especially wanted to avoid the operatic conservatory voices. It is really hard to find singers who sing naturally without a vibrato. At the same time I needed disciplined singers who could execute, for instance, quarter-tones and really sing the melodies in the right way – the way the priest might sing them. It was a big challenge and the arrangements got changed and revised in the process of learning and experiencing this material. Working with the rhythms was complicated for the choir. For instance in ‘Ov Zarmanali’ [written by Grigor Pahlavuni] they are singing chords in 13/16 and I’m improvising on it – not only do they have to keep the metre going and be very precise, but they have to accompany a soloist, with everything that’s going on in my solos, as well as all the metric modulation. So it’s challenging.”

In preparation for the project, Hamasyan also travelled to Paris to study with singer/scholar Aram Kerovpyan. Born and raised in Istanbul, Kerovpyan had moved at 25 to France where he devoted his life to Armenian sacred music. “To me, Aram is closer to the roots than many others,” says Tigran. “His singing is closer to the old Armenian ways. In Armenia, after the Soviet Union and almost a hundred years of atheism, a lot of things have been, I don’t want to say forgotten, but haven’t developed greatly. The music was in the shadow. Only a few singers were keeping it authentic, especially after people started going to the conservatory and being influenced by Russian classical music and European music – and this was beginning to happen even in Komitas’s time. I feel that Aram didn’t experience this influence, and has kept alive traditional ways of singing, rather than singing with a classical manner.”

The recording of the album took place in Yerevan’s Argo Studio. Tigran describes it as a “Traditional-Armenia-meets-ECM experience”: “It was very concentrated work, which I think brought out the best in all of us. Then, on the last day of recording, we had a power cut, and all the lights went out for four hours. So we took a little trip to a nearby 16th century church, and some members of the choir sang there. It was like God was telling us, ‘If you are recording sacred music you need to get to a church at least once before the recording is over.’ It was a strong experience. While there we took a few photos of the façade of the church, which was incredible, with its crazy, detailed ornaments. A few of these pictures made it into the CD booklet.”

2015 is, of course, the centenary of the Armenian genocide. Has this played a role in choosing to do the Luys i Luso project now?

“Even if it was not the anniversary, this project was going to happen. I’ve been listening to this music since I was 14 and the preparation for this album just happened to begin a couple of years ago. But it is important for us to be taking this music on a pilgrimage from Zvartnots, and the ruins of the of the 7th century temple there, to Istanbul. We’re going to the Cilician kingdom where Shnorhali lived and created so much music and was the patriarch of all Armenians. We’re going to Narekatsi’s birthplace. Unfortunately, the Narekavank monastery no longer exists, but we will play and sing close by. We are returning this music to its roots, in some cases to places that are like ghost towns, and where the monasteries and the forts where kings once lived are now ruins. With the music we would like to bring life back to the places where it was born. I personally feel it is a matter of saying ‘Thank you’ to those great authors, composers and saints who lived at that time, and I am glad that we are still able to perform their music today.”

Live performances presenting the music of Luys i Luso began in March 2015 with a premiere in Yerevan, continuing with concerts in Georgia, Turkey, Lebanon, France, Belgium, Switzerland, the Czech Republic, England, Ireland, Germany, Luxembourg, Russia and the United States. In total, a hundred concerts. A documentary film of the tour is in preparation.

Tigran Hamasyan was born in Armenia in 1987, before relocating with his family to Los Angeles in 2003. He currently lives in Yerevan, Armenia. He began playing piano at the age of three, and started performing in festivals and competitions when he was 11 years old, winning the Montreux Jazz Festival’s piano competition in 2003. He released his debut album at the age of 18 in 2006. That same year he won the Thelonious Monk International Jazz Piano Competition, and the jazz world took note in earnest. Since then, Tigran’s live performances and albums have received the enthusiastic endorsement of leading jazz musicians including Chick Corea, Herbie Hancock and Brad Mehldau.

Press reactions have also been very positive. As the Daily Telegraph observed, “There are many brilliant and perfectly finished young jazz pianists around but Hamasyan stands out because he has something important and urgent to say.”

In 2016, ECM will issue a further album with improvisations around Armenian themes, on which Tigran Hamsayan appears alongside Arve Henriksen (trumpet), Eivind Aarset (guitars) and Jan Bang (electronics).